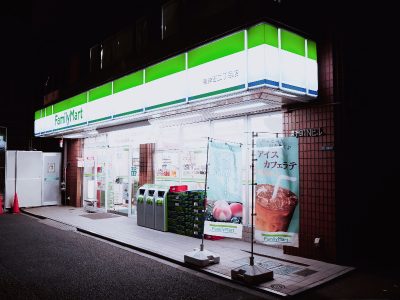 I got on the bus with the group that I was meeting upon their arrival in Japan. It was a late arrival, and I knew they’d be tired from the long day of travel. I suggested to them that they could get dinner at the convenience stores in the basement of the hotel. After all, I had just had some of the best ramen from the convenience store in my airport hotel the night before. Without an understanding of Japan’s convenience stores (konbini), I got looks that said: “you want us to eat nachos and hot dogs on our first night in Japan?” That’s when I took a step back and decided to explain exactly what I meant!

There are three major names behind Japan’s convenience stores- 7-11, Lawson and Family Mart. A recent statistic showed that there are nearly 57,000 convenience stores in Japan. To put that into perspective- Japan is roughly 94% the size of California, and there are 3,032 Starbucks stores in California. To say you can find a konbini on almost every corner is an understatement. Many hotels and businesses have a convenience store at the bottom or basement level. Japan’s konbini has such a wide range of foods, other goods, and services. The food available includes a large range of meals, snacks, and sweets. They have sandwiches, chips, fruits, bento boxes, microwave meals, but most importantly they have fresh hot foods like nikuman (fried pork buns), fried chicken, and soups and stews. The General Manager for new business development for Family Mart was once quoted as saying that every Family Mart receives 3 deliveries a day of fresh hot food- one for every meal. This isn’t your standard heated frozen taquitos on the roller grill. You can find sodas, teas, energy drinks, and usually alcohol in the drink section. You can find basic beauty supply offerings, umbrellas for when you’re stuck without one, newspapers, and magazines. Most convenience stores have a small souvenir section, and they all usually have ATMs, ticket terminals, and luggage transfer services.

On my first night in Japan, I was tired and hungry, and it was dark and I was in the airport industry area. I walked into the Family Mart that was in my hotel lobby, found a wide range of different ramen, brought it to the counter and they warmed it and provided me with chopsticks, and I took it to my room to enjoy before going to sleep. The next morning I grabbed a protein snack that tasted like a jolly rancher candy but had the consistency of cottage cheese, on my way to the hotel gym.

What I’m saying is…when you’re in Japan, make sure and give the convenience store foods a try. You won’t regret it.