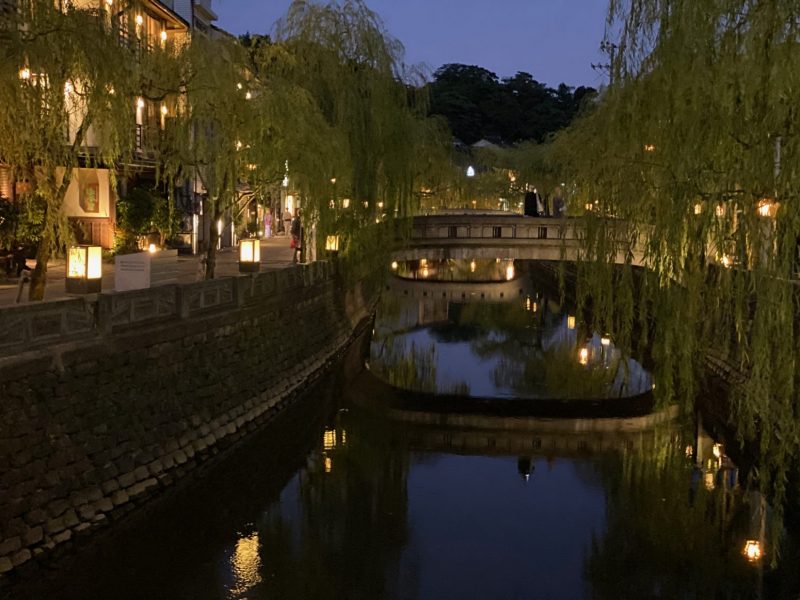 Kinosaki Onsen is located in northern Hyogo Prefecture on the coast of the Sea of Japan. This pleasant town, built along a willow-lined canal, is one of the top onsen destinations of the Kansai Region and is popular with people from all over Japan.

Hot springs were discovered in the Kinosaki area around the 8th century. Legend has it that storks would bathe in the marshes of Kinosaki to heal their wounds. Later, bath houses were built over these very sites to take advantage of the healing waters. Since then the town has developed into a charmingly old-fashioned onsen town. In the evenings guests of the local ryokan stroll about town in yukata (cotton kimono) and geta (wooden clogs), visiting the numerous public baths and nostalgic game arcades.

Today there are numerous ryokan in the area, all with their own baths. But the real draw to Kinosaki are its seven public bath houses (sotoyu). Visitors staying at a local ryokan can use Kinosaki’s seven public bath houses for free between check-in and check-out with a special pass that they receive from their ryokan. In fact, many guests skip their ryokan’s bath in favor of a sotoyu meguri (bath stroll), walking around sampling the various public baths.

The key word here is atmosphere. Walking along the willow-lined canal with numerous traditional-style buildings completing the scene in your yukata (cotton kimono) and geta (wooden sandals) on your way to the public baths is a unique Japanese experience that is worth the trip. If you’re lucky enough to visit the onsen in the winter months, you will be treated to a crab dinner at your ryokan in the evenings. Japanese crab lovers will travel long distances to the Sea of Japan coast during the winter when the crab is said to be the best.

This is a personal negative, but when I visit an onsen I always go alone. I have a very difficult time finding a reasonably-priced room for a single in Kinosaki Onsen. This is especially true in the winter months during the crab season. In many cases, ryokan in Kinosaki Onsen will not even accept a reservation for a single during the winter months.

The public bath houses in Kinosaki Onsen are very nice, but they are also small. Even though there are seven of them, during the peak use times (7 to 9AM and 4 to 7PM) they are often extremely crowded. I have had to wait for a locker in the changing rooms, a spot to wash before entering the bath and a place to sit in the bath during those times in the past. For this reason, I recommend you go there for two nights. This allows you to use the public baths during the middle of the day when they are practically empty.

The Kinosaki Ropeway, on the western end of town, departs from near the Onsenji temple gate to an observation deck at the mountain summit, making an intermediate stop next to Onsenji’s main hall. The ropeway and observation deck offer great views of Kinosaki and surroundings.

Onsenji Temple is dedicated to a Buddhist saint who, according to legend, prayed for 1000 days to bring forth spring water to Kinosaki. In the old days, visitors had to first pay a visit to the temple before being admitted to any of the baths in town. While most people no longer make the journey to Onsenji before bathing, the temple remains a nice place to visit. Onsenji’s main treasure is a two-meter-tall, eleven-headed Kannon Buddha which is displayed to the public in its entirety only once every 33 years for a period of three years (it is currently being displayed from April 23, 2018 to April 24, 2021).

The Oriental Stork (konotori) became extinct in Japan due to modern farming practices, killing off its food supply of frogs, fish and other wetland animals. The last bird died near Kinosaki in 1971. The park was built to reintroduce the storks to Japan using birds obtained from Russia. The storks themselves are now designated a special protected animal by the government, and have become a symbol of the Tajima region around Kinosaki.

Located 10 kilometers south of Kinosaki, the Konotori no Sato Park is part museum and part breeding habitat, where visitors can learn about the storks, the breeding program and conservation, as well as see the birds on the sanctuary grounds. The aims of the program are being realized as local farmers are altering their farming practices to preserve the wetland habitat, and the storks are being successfully reintroduced into the wild. In May 2007, for the first time since 1964, a stork chick hatched in nature. Its parents were born at the sanctuary and released into the wild. The park can be accessed by bus or taxi from Toyooka station, which is 10 minutes from Kinosaki by train.

Izushi is a castle town that flourished during the Edo era. There are several fine displays of traditional architecture found throughout the town, which is why Izushi is designated as a national preservation district of important buildings. The town is also famous for its own original style of soba, Japanese buckwheat noodles. Approximately 50 soba shops line the town’s streets. Eirakukan Kabuki Theatre is the oldest working kabuki theatre in the Kansai Area. The full access tour of Izushi’s Kabuki theatre, Eirakukan, will put you on, behind, and under the stage. This is a rare and fantastic experience will help you feel like a real kabuki actor and take a closer look at the mysterious workings of a traditional Kabuki stage. The best way to get to Izushi is by bus from Toyooka station.

Hours: 13:00 to 21:00
Closed: Mondays
Satono-yu is Kinosaki’s largest bath house, located next to the train station. It has two styles of baths, traditional and Romanesque, which rotate daily between men and women. The large variety of baths includes waterfalls and mist rooms, as well as steam, dry and penguin (refrigerated) saunas. 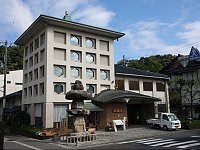 Hours: 7:00 to 23:00
Closed: Fridays
Jizo-yu is located at the intersection of the river and Ekidori, the main road that leads to the Kinosaki train station. This bath house’s main baths feature high ceilings. Private family baths are also available for 3150 yen per 45 minutes.

Hours: 15:00 to 23:00
Closed: Thursdays
Recently renovated, Yanagi-yu (“willow bath”) is Kinosaki’s smallest public bath house, but some find its traditional feel with hand-cut timbers and wooden baths particularly inviting. It also has a small street-side ashiyu (foot bath) next to its entrance. 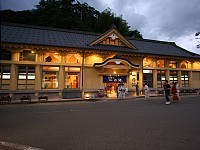 Hours: 7:00 to 23:00
Closed: Wednesdays
Ichino-yu is located near the center of town and was last renovated in 1999. Its indoor baths are modern granite while its outdoor baths are located in a cave. Private family baths are available for 3150 yen per 45 minutes.

Hours: 7:00 to 23:00
Closed: First and third Thursday of each month
Completely redesigned and rebuilt in 2005, Goshono-yu (“imperial palace bath”) is one of Kinosaki’s larger bath houses, featuring a multi-level outdoor bath facing a waterfall, as well as a granite water bench and a steam sauna where onsen water is sprayed into the air to create a fine mist. 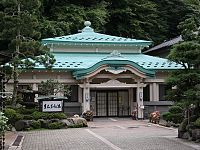 Hours: 15:00 to 23:00
Closed: Wednesdays
Mandara-yu is the only bath house that is located off the main road. You’ll find it one block south of the main road (Yunosatodori) just before the road turns north to the ropeway entrance. It has an enticing outdoor bath, and it is said that Mandara-yu is the most attractive of the public baths.

Hours: 7:00 to 23:00
Closed: Tuesdays
Kono-yu is near the ropeway entrance located on the spot where legend says that storks would bathe to heal their wounds. It was the first bath house in Kinosaki, although it has been rebuilt numerous times since its founding. Kono-yu features an outdoor bath with a view of the surrounding forests.

Onsen manju, a dumpling steamed in mineral water, is probably the signature sweet people think about when they look for a gift to take back from any onsen. There are many shops selling Onsen Manju with numerous fillings from the traditional sweet bean paste to crab or Tajima Beef.

Located in the heart of Kinosaki Onsen, Nishimuraya Honkan is the premier luxury ryokan of Kinosaki. All rooms are traditional Japanese-style with private bath and toilet. Hot springs with open-air baths and a large Japanese garden are among the facilities guests can enjoy.

Nishimuraya Hotel Shogetsutei is the sister ryokan of Nishimuraya Honkan. This luxury hotel welcomes a new era of Japanese hotels with a 150,000 sq. m garden, forest relaxation experiences, and herb garden. A mist sauna, jacuzzi bath and open-air baths are available separately for both men and women.

This long standing inn inspired the master literary Naoya Shiga’s beloved novel ‘Kinosaki ni te'(At Cape Kinosaki).
Mikiya is a traditional inn that carries on the traditions of the past, and provides a quiet and relaxing place for their guests.