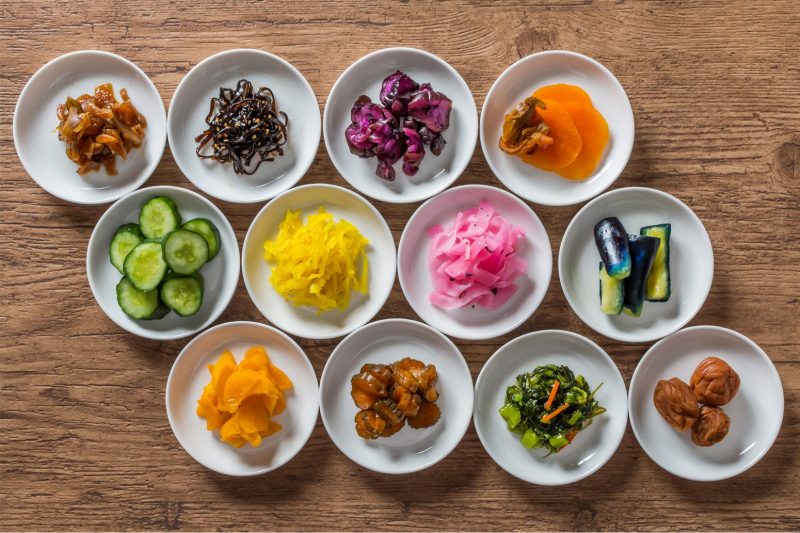 The following are some of the more common types of tsukemono (Japanese pickles) that travelers are likely to encounter. Most tsukemono can be found nationwide, except where noted, however the exact ingredients of each tsukemono type may vary from region to region and household to household.

Umeboshi are Japanese plums (related to apricots), which have been salted and dried. The wrinkly red pickles are extremely salty and sour, although sweeter versions exist. Umeboshi serve as a preservative and digestive. They are eaten with all types of traditional meals, and often accompany the rice in boxed lunches (bento). Umeboshi are also one of the most popular fillings for rice balls (onigiri).

Takuan is made of Japanese radishes (daikon – a large white radish), which have been sun dried and pickled in a mixture of salt, rice bran and sugar. The finished product is a sweet, crunchy pickle that is sliced and served alongside rice or other dishes. Takuan ranges from brownish white to fluorescent yellow in color. In Akita Prefecture they are additionally smoked and enjoyed as iburigakko.

Assortments of nukazuke pickles consisting of cucumber, carrots, eggplant, daikon or turnip (kabu) are often served alongside set menu meals (teishoku) or as a part of the rice set (shokuji) in Kaisei ryorui (Japanese haute cuisine) meals. Often similar assortments of vegetables pickled in salt or miso are served instead.

Kyuri asazuke are simple pickles made of cucumbers marinated in a salt brine (shiozuke) that is sometimes seasoned with konbu (kelp), Shichimi togarashi pepper and/or vinegar. Whole cucumbers served on a stick are often pickled this way and sold by street vendors at festivals, temple approaches and popular tourist spots, especially during spring and summer when they are a refreshing treat.

Hakusai no Sokusekizuke is a quick and simple salt pickle dish made of lightly salted hakusai cabbage (Napa cabbage) which is often mixed with carrots and cucumber and seasoned with yuzu zest (citrus), konbu and Shichimi togarashi pepper. The result is a salty, crisp pickle with a slightly spicy citrus flavor. It is one of the most common pickles found in Japan and is often served alongside set menus. meals (teishoku).

Narazuke are deep brown pickles native to the Nara Region of Japan, from which they get their name. Vegetables, typically daikon, uri (gourd) or cucumber, are soaked in sake lees (kasuzuke) in a process where they may cure for several years. As a result the pickles have a strong, pungent flavor which is often punctuated with an overtly alcoholic bite.

Senmaizuke is another Kyoto specialty pickle. It is made of thin slices of turnip arranged brined in sweet vinegar seasoned with konbu and Shichimi togarashi pepper. The resulting thin disks (senmaizuke means thousand layer pickle) are sweet and sour with a slightly crunchy texture.

Saikyozuke (lit. West Kyoto pickle) are slices of fish, typically a whitefish such as cod or sablefish, which have been preserved and marinated in miso paste. The slices are then grilled or broiled, and served either hot or at room temperature. Fish preserved this way gets a sweet, caramelized flavor due to the miso.

Nozawana are a specialty pickle from Nozawa Onsen in Nagano Prefecture; however, they are commonly served all over Japan. Nozawana are a type of turnip greens which are dried and pickled in a salt brine seasoned with Shichimi togarashi pepper and wasabi. The salty, slightly spicy leaves and stems are served cut into bite-sized pieces or chopped into a fine relish.

Local to Matsumae city in Hokkaido, matsumaezuke is an interesting combination of regional specialties of Hokkaido such as squid, konbu, kazunoko (herring roe) and carrots, seasoned with sake, soy sauce and mirin (sweet cooking rice wine). It has attained nationwide popularity.

Most tourists are probably already familiar with gari, the thin slices of sweet pickled ginger that is served alongside sushi. Gari has a sweet and sour flavor with a slightly spicy bite. It is meant to be eaten between sushi pieces as a palate cleanser, so that the unique flavor of each piece can be fully appreciated. Gari is naturally light yellow, but may also be dyed pink.

Beni Shoga is julienned young ginger that has been pickled in plum vinegar (umezu), a byproduct of making pickled plums (umeboshi). The bright red, salty and spicy pickles are served as a garnish on top of a variety of dishes such as gyudon (beef rice bowl), takoyaki and yakisoba.

Fukujinzuke is a mixture of Japanese radish (daikon), lotus root, cucumber and eggplant which are preserved in a soy sauce and sweet cooking wine (mirin) base. The sweet brown or red relish is served as a garnish to Japanese curry (kare raisu).

Rakkyo are sweet pickled scallions that are served alongside Japanese curry. These tsukemono lend a sweet, crunchy bite that, like fukujinzuke, helps to augment the spicy and salty flavors of curry.
0Shares
PrevNext