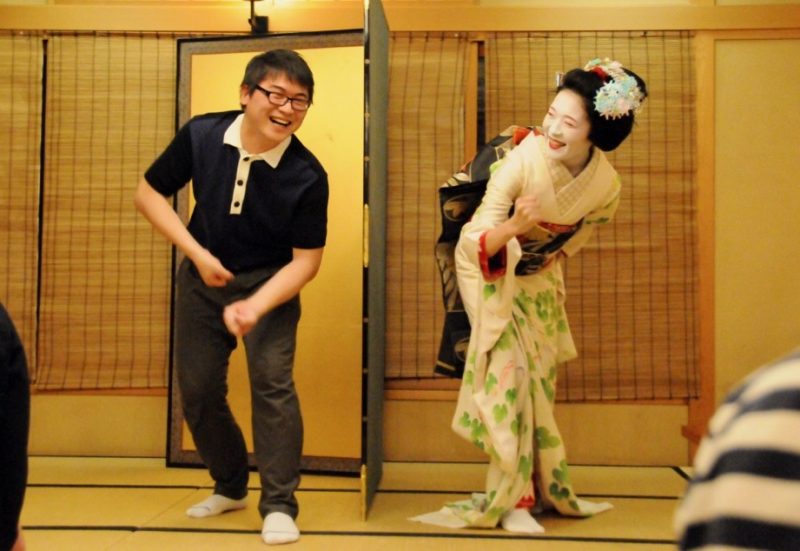 “Tora Tora Tora” (Tiger Tiger Tiger) is a Japanese party/drinking game played by Maiko with their clients. The game is another version of “Jyan ken pon” (the Japanese name for Rock, Paper, Scissors). The game is played between two players who start on opposite sides of a wall, or as in this case, a rice paper screen. The players sing a song while making hand gestures, and then assume one of three characters: a Samurai (Watonai) with a spear, an old woman with a cane or a tiger. The old woman wins over the Samurai, the Samurai wins over the tiger and the tiger wins over the old woman.

The song they are singing (in English) is:

“Everyone please look at the bamboo grove which extends thousands of miles.

You can see Watonai with a gold headband and a cord catching a tiger.

Watonai (the full name is Watonai Coxinga) is based on a real person who lived about 600 years ago. However, over time he has taken on a mythological stature, and has been the subject of many Kabuki and Bunraku plays. According to the legend, he was born in Japan with a Chinese father and Japanese mother. His father, a former official of the Ming Dynasty, convinced his son to travel to China to drive out the Manchus and to restore the Ming Dynasty. In China, Watonai encounters a tiger in the Bamboo Forest of a Thousand Leagues, which he subdues aided by a charm from the Great Shrine of Ise. Watonai and the tiger then join forces to defeat a group of Chinese soldiers.

The video below was taken on one of our Best of Japan tours this summer at our Sayonara Dinner and Meet a Maiko session. Enjoy!!