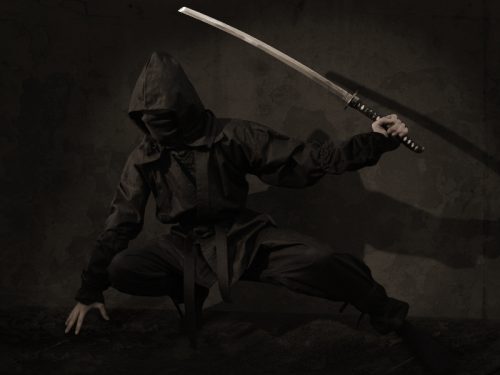 We have information technology nowadays to find and watch what our prospective enemies. However, hundreds of years ago, the samurai did not have these kinds of technology. Instead of using high technology, they used ninjas. When they were fighting, the feudal lords needed to know the strategy and military power of their enemies and that is why they hired ninjas. They were spies or assassins who were trained as special agents to detect the movement of the enemy.

They also regulated or fabricated information to deceive the enemy into believing fake news. When feudal lords were fighting, ninjas entered the enemy’s ranks and spread confusion and chaos by spreading false information. So they were also the forerunners of creating ‘fake news’.

Ninjas were very active during the civil war period 500 years ago. They helped Tokugawa Ieyasu, who later became shogun, escape from Kyoto when he was almost caught by his enemies. After the Tokugawa government was established, the role of ninjas ended and they gradually disappeared.

Due to their job as spies, they had various kinds of weapons. Straight swords for stabbing, sickles and chains used as weapon and farming, star-shaped darts, small explosives with gunpowder, ion hooks for climbing walls, and foldable boats and a skipper to walk on water. They underwent rigorous training to reach their peak physical potential. They could survive for a week without eating anything. They used smoke messages among themselves. They were also able to make use of herbal medicine. They had “spells” to improve their concentration and performed hand signs to remove their nervousness.

As a spy, ninjas disguised themselves as either merchants, Buddhist monks, or even farmers during the day to keep a low profile and were active at night.

Nowadays, ninjas are depicted as heroes with amazing abilities like superman or spiderman who show themselves in the light day. However, historically, they were men who lived in secret. They hid as much as possible and we almost don’t have enough records of their daily lives.