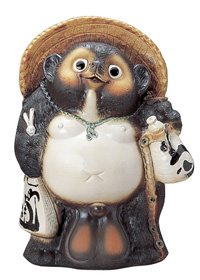 Even though they are an actual animal living in Japan, Tanuki are also among the most recognizable images in Japanese folklore, and have been part of Japanese folklore since ancient times. The legendary tanuki is reputed to be mischievous and jolly, a master of disguise and shape-shifting but somewhat gullible and absent-minded. Statues of tanuki can be found everywhere in Japan in front of restaurants and drinking establishments. These statues often wear big, cone-shaped hats and carry bottles of sake in one hand, and a promissory note (which it never pays) or empty purse in the other hand. Tanuki statues always have large bellies, and also usually show humorously large testicles, typically hanging down to the floor or ground. It is worth noting the tanuki’s testicles are unrelated to sexuality or fertility, and instead are merely a symbol of good luck and an element of silly and risque humor.

In folklore the tanuki is a bit like the plump, comical brother of the fox, equally prone to mischief and shape-changing and the deception of humans, and is often blamed for all sorts of ghostly occurences. Both are pictured as mischievous rogues who often get themselves into trouble. They can, at times, be frightening creatures, and at other moments be capable of making a negative situation positive. Sometimes they are treated as godly figures and become cultural heroes. Tanukis seem to have a hedonistic bent, constantly on the prowl for sake, food, and women. It also seems quite good at turning itself into inanimate objects, such as the tea-kettle in the famous story of the Bunbukuchagama. Tanuki are also said to cheat merchants with leaves they have magically disguised as paper money, or to fool unsuspecting diners by disguising horse excrement as a delicious meal.

Tanuki statues have been marketed as front yard decoration and good luck charm for bringing in prosperity. The Tanuki beckons drinkers and diners to enter similar to the Maneki-neko (Beckoning Cats). Tanuki are thought to have eight special traits that bring good fortune. The eight traits are: (1) a bamboo or leaf hat that protects against trouble, (2) big eyes to perceive the environment and help make good decisions, (3) a sake bottle that represents virtue, (4) a big tail that provides steadiness and strength until success is achieved, (5) over-sized testicles that symbolize financial luck, (6) a promissory note that represents trust, (7) a big belly that symbolizes bold decisiveness, and (8) a friendly smile.

The real tanuki is often mistakenly thought of as a raccoon or badger. It is actually neither, but a member of the Dog family that resembles the North American raccoon. Commonly called a “raccoon dog” in English, Nyctereuctes procyonoides is easily distinguished by lacking its look- alike’s tail rings, and walking on its toes like a dog. The Tanuki is native to Japan, southeastern Siberia and Manchuria.

During the Kamakura and Muromachi eras, some stories began to include more sinister tanuki. The Otogizoshi story of “Kachi-kachi Yama” features a tanuki that clubs an old lady to death and serves her to her unknowing husband as “old lady soup,” an ironic twist on the folkloric recipe known as “tanuki soup.”A popular tale known as Bunbuku chagama is about a tanuki who fooled a monk by transforming into a tea-kettle.

This story comes in many versions. In one, a poor woodsman saves the life of a Tanuki. In thanks, the Tanuki transforms itself into a chagama (tea kettle) that the poor man sells to a priest. The priest takes it back to his temple, where he orders his staff to clean it and make some tea. As you might imagine, the Tanuki was very unhappy with his role as a cooking utensil, for it hurt to be polished and used on the fire. After a time, the Tanuki escapes the temple and returns to the woodsman, and thereafter makes money for the “woodsman-turned-traveling-entertainer” by dancing as a kettle on a tightrope. In another version, a priest tries to catch a Tanuki to eat for dinner, but the Tanuki escapes by changing itself into a tea kettle, which the priest takes back to the temple. But when the priest places the kettle on the fire to make some tea, the kettle sprouts limbs and soon resumes its true Tanuki form.

This story portrays Tanuki as an evil creature. He robs from the field of an old farmer, but is caught by the farmer’s wife. To regain his freedom, he lies to her, and once released, he kills her and runs away. But the old farmer, with the help of a rabbit (usagi), avenges her death. In one section of the story, the rabbit and Tanuki are gathering firewood. On the way home, the rabbit tries to set fire to the wood on Tanuki’s back. When Tanuki asks the rabbit “What’s that sound,” the rabbit replies “Don’t you know? (Kachi-Kachi is the Japanese word for the sound made when using flint to light a fire.) In the final scene, the rabbit and Tanuki are having a boat-racing contest, but since the Tanuki’s boat was made from mud, it sinks in the middle of the lake, and the Tanuki drowns.

The tanuki of Shikoku seem especially prone to going to war. In Ehime prefecture an audacious tanuki named Inugami-gybu had a band of eight hundred and eight followers, and layed plans to capture Matsuyama Castle, but the tanuki were all defeated and sealed up in a cave by a hero wielding a magic wooden hammer. Another famous tanuki battle took place in Tokushima prefecture, when the tanuki hero Kinch got into a feud with his tanuki mentor Rokuemon, and all the raccoon dogs in the area wound up participating in the fight. In the end Rokuemon was defeated and Kinch died from his wounds, but a human friend of Kinch’s erected a shrine in his honor which is still visited today.