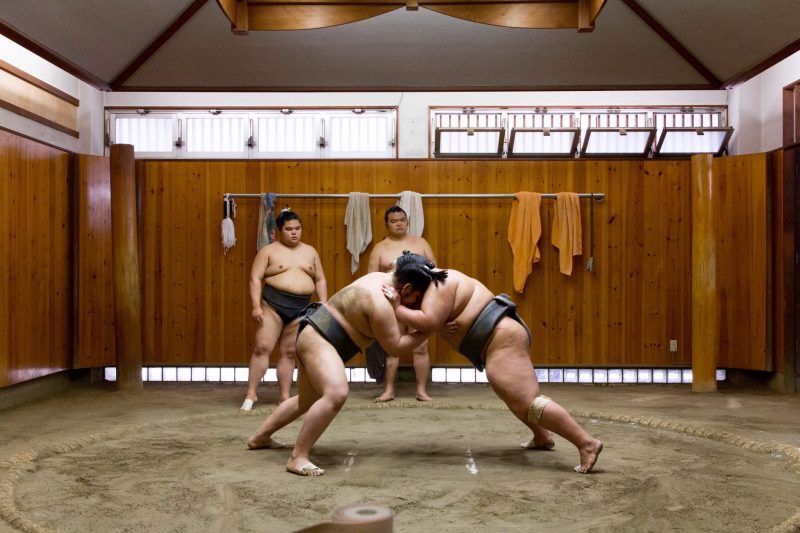 Sumo is a traditional Japanese wrestling which dates back 1,000 years, and started as a performance dedicated to the emperors and Shinto deities. Sumo wrestlers still follow religious rituals which date back hundreds of years. The basic rules of sumo are simple: the wrestler loses if any part of his body except the soles of his feet touches the ground, or if he steps out of the ring. Matches take place on an elevated ‘dohyo’ ring, and usually last only a few intense seconds.

They only wear a loincloth called a ‘mawashi’ to show they are not hiding anything and to show the pureness of their bodies. At the beginning of each match, the wrestlers will toss salt into the ring. In Shinto, salt is considered to be purifying. This practice is important because the ring is considered to a holy and spiritual place. The wrestlers will stamp their feet to chase away evil spirits, and they will clap their hands to do the same thing and to show they have no weapons.

There are about 800 professional sumo wrestlers. They are divided into two grades: the Maku-uchi, which is the senior grade and the Maku-shita which is the junior grade. The top of the hierarchy is Yokozuna (grand champion). Then come Ozeki, Sekiwake, Komusubi and Maegashira, the lowest rank. Ranking is very important in Sumo, and the “banzuke”, a hierarchal listing of the wrestlers is released about two weeks prior to each tournament. This list is created using a set of guidelines and rules that are hundreds of years old.

Once a wrestler reaches the rank of Yokozuna, he cannot lose this status but he will be expected to retire when his results begin to worsen. Currently about one third of Maku-uchi(senior grade) wrestlers come from outside Japan.

There are no weight restrictions or classes in sumo so wrestlers can easily find themselves matched off against someone many times their size. As a result, weight gain is an essential part of sumo training. The typical sumo dish, chanko nabe, is a stew full of vegetables, meat chicken and fish.