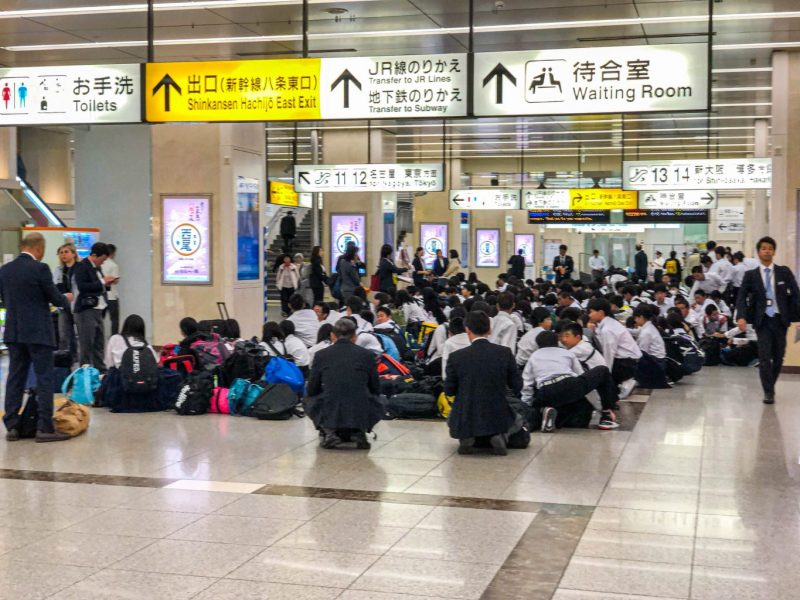 During the month of May you will find hundreds of young students in uniform at historic spots in Kyoto, Nara and Hiroshima. You may think they are skipping classes in a group but actually they are enjoying a field trip. School trips are a part of the school education in Japan and it’s compulsory for most of the students. When traveling from city to city, the school groups will travel in groups of as large as 400 or 500 students. During this time of the year, entire Shinkansen trains are dedicated to school groups. But when touring a destination, they go around historic spots in groups of 5.  They are by themselves or with a taxi driver. They don’t have to worry about being kidnapped or robbed because the crime rate is very low in Japan.

School excursions started in Japan about 130 years ago when parents could not afford to send their children to far-away places. Nowadays, most families have the money to give their children a trip around Japan or abroad but excursions have positive effects on children. School excursions are not only an opportunity to enjoy but also a chance to learn. School trips will broaden their horizon. At the same time, they will also learn social skills and basic etiquettes in interacting with other people such as keeping quiet on a train and waiting patiently in line. Students can get to know each other well and realize other aspects of the classmates’ personality by spending an entire day with their classmates. While at school, they only see each other in the daytime.

School trips also fuel domestic tourism. If they have a good experience during the tour, they may think about coming back once they have their own money. Nowadays schools have more expensive and more distant trips and some even take students abroad.