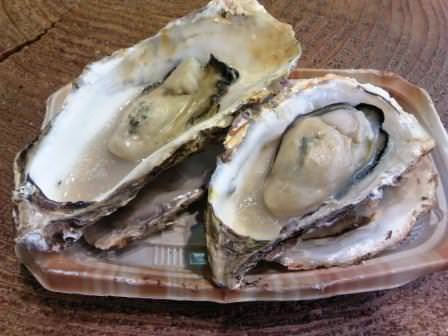 As you travel around Japan, you will find each region has its type of food (or foods) that it is known for. My mantra when it comes to Japanese food is to eat the local specialties. One of the specialties, among others, of the Miyajima Island/Hiroshima area are oysters.

Anyone who has taken the ferry to Miyama Island has seen the numerous wooden platforms floating in the water between the island and mainland. These are just a few of the many oyster “farms” located in the region’s waters. Numerous ropes are hung from the bottom of these platforms. A single hole is drilled in the center of scallop shells, and are hung every inch or so along the rope. The oysters, after hatching, are very similar to tiny tadpoles, and like to attach to the scallop shells. After some time, the ropes are pulled out of the water and those shells without attached oysters are removed to give room for the attached oysters to grow, and placed back in the water. After 1 to 2 years, the ropes are pulled up again, and the oysters are harvested.

On the island, the oysters are prepared in various ways. But the most popular of these methods is grilling. There are scores of stands with grills everywhere on the island turning out these gourmet treats. The oysters are placed on the half shells over the grill and cooked only slightly. The oysters are served in their own juices along with various condiments including olive oil, soy sauce, lemon wedges and ponzu sauce (soy sauce mixed with citrus – my personal favorite).