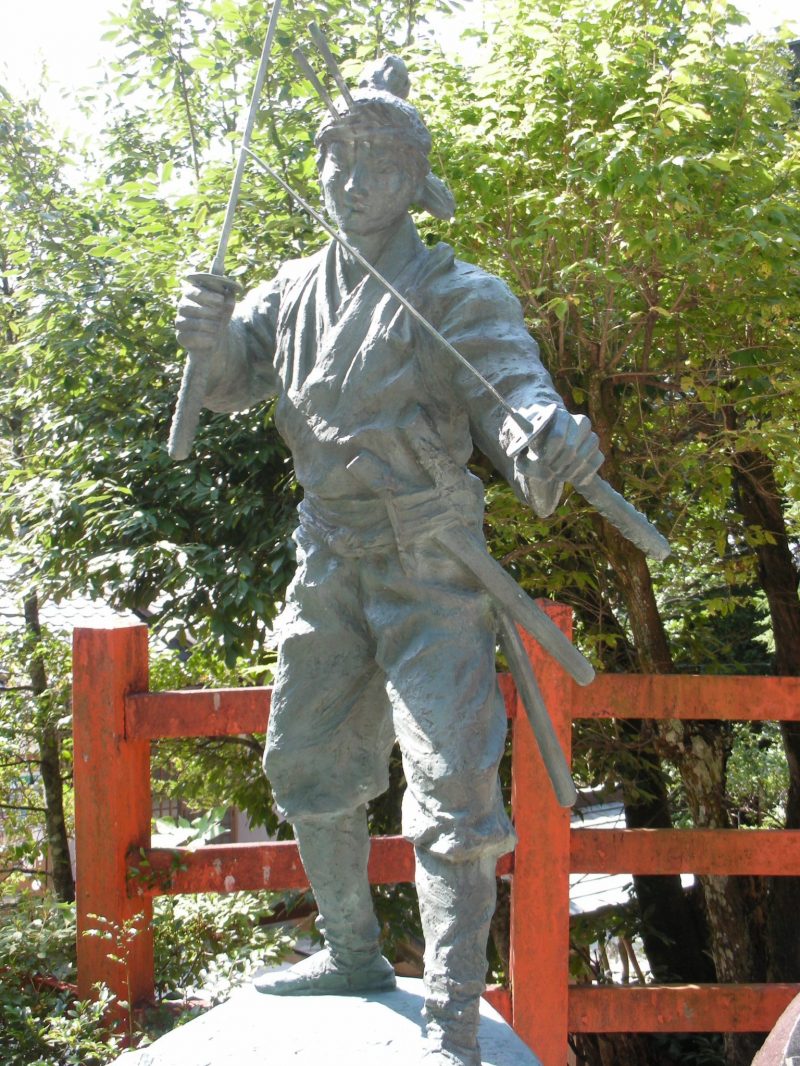 Musashi Miyamoto (1584-1645) was Japan’s most famous and most skilled swordsman. It is thought he participated in at least 60 duels and was never defeated. In his book,  “The Book of Five Rings”, he set down his thoughts on swordplay, on winning and on spirituality. Along with The Art of War by Sun Tzu, The Book of Five Rings has long been regarded as an invaluable treatise on the strategy of winning. Musashi’s timeless advice on defeating an adversary, throwing an opponent off-guard, creating confusion, and other techniques for overpowering an assailant was addressed to the readers of earlier times on the battlefield, and now serves the modern reader in the battle of life. This book is an almost required read by Japanese businessmen, many of whom see themselves as modern-day Samurai waging war in the boardrooms of Japanese companies. He was also the founder of the Niten-ryū (Two Sword Style)  school of swordmanship. In this style two swords are used, one in each hand. He spent the last years of his life as a hermit living in a cave near Kumamoto on the island of Kumamoto, concentrating on his writing, art works and spirituality until his death in 1645.

Musashi Miyamoto was born in the village of Miyamoto, north of the city of Himeji in the year 1584. He received training in the martial arts and fencing from his father until the age of 7, at which time his uncle took over his training. His first duel came at the young age of 13. In 1600, he left home to fight for Hideyoshi’s “Army of the West”, against the eastern army of Tokugawa Ieyasu. He participated in the attack of Fushimi Castle, the defense of Gifu Castle and finally fought on the losing side in the pivotable Battle of Sekigahara. After this, there are no records of his life or his whereabouts until, at the age of 20, he appeared in Kyoto in 1604.

Musashi’s time in Kyoto was closely related to the Yoshioka family. The Yoshioka family was appointed as the fencing instructors for the Ashikaga shogunate in the mid 16th century. This was a prestigous position, and made the Yoshioka school of fencing one of the most sought after fencing schools in Japan. Musashi challenged Yoshioka Seijuro, the fourth generation master of the Yoshioka school shortly after arriving in Kyoto. Seijuro, fearing that if he declined it would appear he was avoiding Musashi, acceptedthe challenge. Their duel was held on March 8, 1604 at Rendaiji Temple in northern Kyoto. There are numerous accunts of the duel, but the general consensus is that Musashi arrived late, which greatly irritated Seijuro. It is also widely thought that wooden swords were used, but Musashi landed a blow on Seijuro’s left arm, causing him to lose the arm while Musashi was uninjured and unscathed. Seijuro passed the leadership of the school to his younger brother Denshichiro, who immediately challenged Musashi in an attempt to regain the honor of the school. Their duel was held a short time later at Rengejoin Temple, known today as Sanjusangendo, one of the most popular sightseeing destinations in Kyoto and a UNESCO World Heritage site. Musashi arrived late again, but this time real swords were used and Denshichiro was killed by Musashi.

This second defeat was a complete loss of face for the Yoshioka familiy and their school. Looking for revenge, the school challenged Musashi again. This time, 12 year old Yoshioka Matashichiro, the oldest son of Seijuro was chosen as the leader of the challenge. However, because of his age, he was to be a figurehead only and others from the school would act as his proxy. The place chosen for the duel was near the Ichijoji Temple at the base of the Sagarimatsu tree in northeastern Kyoto. The Yoshioka Family assembled a force of archers, musketeers and swordsmen in an all-out, go-for-broke bid to kill Musashi in the hopes of regaining their prestige. It is thought as many as 72 from the Yoshioka school assembled for the duel against Musashi.This time however, Musashi arrived early. It is said he killed Matashichiro, and also killed as many as one half of the opponents before escaping.

After this, the Yoshioka family continued with their fencing school, although they had lost all of their prestige and the school was never the same again as a result. In 1614, they supported Hideyoshi Hideyori at the Winter Campaign of the Seige of Osaka Castle. After this, the Yoshioka family closed the fencing school and started a business dying silk for kimonos. Today, the Yoshioka family is one of the most sought after and prestigious silk dyers in Kyoto. Musashi continued with his duels after this. In 1614, ironically he also fought with Toyotomi Hideyori at both the Winter and Summer Campaigns of the Osaka Castle Seige. There is much more ofthe story to tell regarding Musashi in his later life, but we will save that for a later time.

Today, you can still visit Ichijoji, where you will find a monument dedicated to Musashi next to the 4th generation of the Sagarimatsu Tree where the duel was contested. And, if you walk about two blocks further up the hill, you can visit the Hachidai Shrine. It is said Musashi stopped here at this shrine before the duel. He was going to offer a prayer to the gods to ask for help during the duel. However, he changed his mind saying that he should depend on himself and his own talents rather than depending on the gods. But, best of all, at the Hachidai Shrine, you can find a small piece of the original Sagarimatsu tree.

How To Get To Ichijoji

There are numerous ways to get there, depending on where you are starting from. However, I would suggest taking the Number 5 bus from Kyoto station. It will take 30-40 minutes, but it is the easiest way to get there. You should get off at the Ichijoji Sagarimatsu bus stop. From there, walk up the hill 2 or 3 blocks to the monument and the current Sagarimatsu. From there, it is another 2 or 3 blocks up the hill to the Hachidai Shrine.