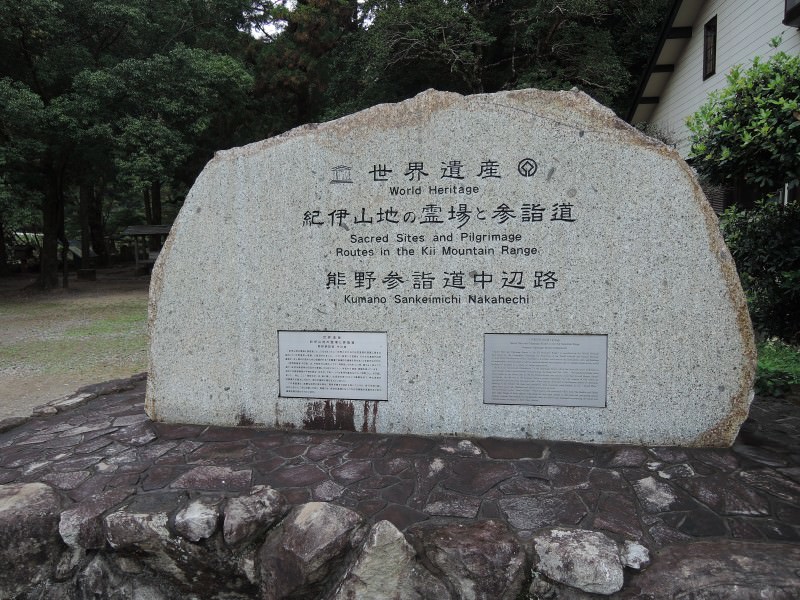 I set out for my Kumano Kodo trek from Kyoto as did pilgrims more than 1,000 years ago. At that time, it was common practice to visit Jonan-gu Shrine just south of Kyoto near Fushimi. Here, pilgrims would stay for about a week and perform “misogi” (Shinto water purification rituals) and maintain a strict vegetarian diet to purify themselves before starting their pilgrimage. After leaving Jonan-gu, they would travel down the nearby Yodo River by boat, and then walk along the Kiiji pilgrimage route along the western coast of the Kii Peninsula. After arriving at the present site of the city of Tanabe, they would follow the Nakahechi along the river until reaching Takijiri Oji. I visited the Jonan-gu shrine before today, but I didn’t stay for a week, and I didn’t perform any water purification rituals or eat only vegetables.

I took the only express train during the day which leaves from Kyoto to avoid having to take the “shinkaisoku” express train to Osaka from Kyoto and then catching the Kuroshio express train at Shin Osaka station. The trip by express train to Tanabe was about 2 1/2 hours. At Tanabe, I transferred to a bus (bus stop 2) for the approximately 45 minute bus ride to Takijiri Oji. (You can stop at the Tourist Information Center next to the bus stop and purchase your bus ticket at the counter, or you can pay on the bus as normal.)

It is here at Takijiri Oji that the Kumano Kodo leaves the river and starts to climb into the mountains of the Kii Peninsula. Takijiri Oji is one of the five most important of the Oji found along the Kiiji and Nakahechi. Oji were subsidiary shrines of the Kumano Sanzan (Hongu Taisha, Hayatama Taisha and Nachi Taisha) and important places of worship and rest. At many of the Oji, religious rituals including “misogi” were performed and offerings of poetry and other items were made. Some of the Oji would have lodging for pilgrims, although usually the lodgings at the Oji would be reserved only for the highest-ranking people. As a whole, the Oji were referred to as the “ku-juu-ku Oji”, or the 99 Oji. There were not really 99 Oji, but the name implies there were numerous Oji.

Takijiri Oji was considered an important point along the Kumano Kodo pilgrimage. At its height in the 11th and 12th centuries, there were many halls, a bath house, lodging for pilgrims and residences for priests, priestesses and monks. Takijiri Oji is located at the point where the Tonda  and the Iwabune Rivers meet. It is said that misogi rituals were performed in the rivers here at Takijiri Oji before pilgrims would start their walk through the mountains. It is said by some people that “Izanagi”, the male deity in Shinto creation mythology performed water purification here at Takijiri Oji in the Tonda River after seeing his dead wife’s (Izanami) body. It was thought by the pilgrims the Tonda River was actually the mythical Sanzu-no-kawa River which separates the land of the living from the land of the dead.

When you arrive at Takijiri Oji, you will see a lot of on-going construction and repair on the river channels. This area (as is much of the Kii Peninsula) is still trying to recover from a major typhoon that struck the Kii Peninsula in September 2011. Because of the geography of this location, and the fact that two rivers meet at this location, this area has been susceptible to disasters for a very long time. One of the earliest records of this is from the year 1210. After a major rain and resulting flood damaged the area, a large group of laborers were hired to build a new bridge to replace the old one that had been washed away.

From the Takijiri bus stop, you should cross the bridge across the highway to the Kumano Kodo Kan. This small building houses a few displays chronicling the history and culture of the Kumano Kodo pilgrimage, and is certainly worth a short stop. You can also perform your own water ritual by filling up your water bottles here. There are also restrooms here as well. When I stopped at the Kumano Kodo Kan, I was offered an “umeboshi” (dried, pickled plum) which is a specialty of the area. And if you are so inclined, you can dress up in Heian Period pilgrims clothing and take photos. (For a fee of course.)

Across the highway from the Kumano Kodokan you will find a couple of small shops. But more importantly, you will find the beginning of the Nakahechi pilgrimage route. Next to the World Heritage sign is a small rest stop with a couple of covered tables where you can complete your final preparations for the walk. And only a few steps away is the Takijiri Oji behind a torii gate.

The Nakahechi trail starts to the left of the Tajijiri Oji, and then starts to climb up the hill behind the Oji. The first 1 1/2 to 2 kilometers (about 1 mile) is steep. But after several years of hiking and climbing Japanese mountains, I have seen much worse. (And yes, I did walk 5 miles to the grocery store through 3 foot snow drifts in my bare feet, carrying my 150 pound mother. OK, so maybe I am exaggerating a little. My mother only weighs 125 pounds.) But seriously, the trail is a little steep, but relatively speaking by Japanese standards it isn’t so bad. And the steep section is very short.

There are a couple of interesting sights along this section. First, you will come to the Tainai Kuguri test of faith. This is several rocks resting against each other forming a small tunnel/cave. Walking through this is called “tanai kuguri”. The literal translation of this is “passing through the womb”, and is a test of faith. According to superstition, it is said that pregnant women walking through the cave will have a smooth and easy delivery.

You will also come to the “Chichi Iwa” (the literal translation is milk rock). Legend has it that Fujiwara Hidehira, a member of the powerful Fujiwara clan, and his wife were on pilgrimage to Kumano. His wife suddenly went into labor and gave birth to a child in this cave. They left the child here and continued on their pilgrimage. A wolf found the child and saved him by dripping milk down the rock. The parents returned on their way home, gathered the child and continued home.

At the top of the steep section, the trail will begin to level off and will even go downhill for awhile. It was here at the top of the steep section, near where the trail intersects with the paved road that I ran into several monkeys in the trees. These are the same type of monkeys as the famous “snow monkeys”. This species of monkey is only found in Japan, and they are found just about everywhere at the lower elevations of  mountains of Japan.

After a downhill section, the trail starts uphill again for the final section of the trail to Takahara. Takahara is also called “kiri no sato” in Japanese, which translates to village of fog. It is easy to understand how it got that name. The village is located on a high ridge, with excellent views of the surrounding mountains. But the mountains are almost always shrouded in fog.

As you first enter the village, you will come to the Takahara Shrine. The shrine building here is one of the oldest along the Kumano Kodo, and dates back to 1403. There are also a few large camphor trees. It is thought these camphor trees are more than 1,000 years old.

From here, it is a short walk to the Takahara Rest Stop. You can stop here for the excellent view, use the restrooms and vending machines and also try the sweets for sale. From the rest stop, it was a short walk to my minshuku located on a high ridge with fantastic views of the surrounding mountains. I checked in for a well-deserved bath and fantastic kaiseki-style dinner (Over the years, I have stayed at hundreds of ryokan and minshuku, and have had thousands of kaiseki dinners at those ryokan and minshuku. The dinner at this minshuku ranks near the top.), and to prepare for my walk tomorrow to Tsugizakura Oji.