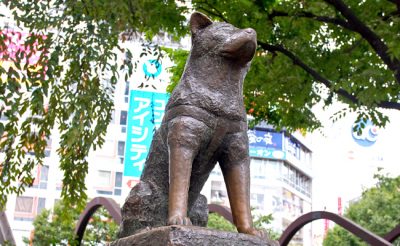 You may be familiar with Hachiko as his story was made into a Hollywood movie in 2009 called ‘Hachi: A Dog’s Tale’ which starred Richard Gere.  Hachi was a stray dog. A professor of Tokyo University found this abandoned dog and took him home. Over a period of time, he formed an unbreakable bond with Hachi.

Hachi always waited for his master at Shibuya Station but one day his master didn’t come back to him. But one day, the professor had a heart failure at the university and passed away. But even after his master’s death, Hachi came to Shibuya Station every day and waited for his master for nine years until his own death. He was spotted by the locals and became a symbol of loyalty. His first bronze statue was erected while he was still alive but it was melted down for military use during World War 2. The second statue was rebuilt after the war.

Today, this statue is a popular meeting point. ‘Let’s meet at Hachiko’ is a phrase often used among young people. It’s also a famous picture spot. Many people take pictures with ‘loyal’ Hachi. And boys pledge faithfulness to their girl friends in front of this statue.