Hiroshima (広島) is home to over a million inhabitants. When the first atomic bomb was dropped over Hiroshima on August 6, 1945, the city became known worldwide for this unenviable distinction. The destructive power of the bomb was tremendous and obliterated nearly everything within a two-kilometer radius.

After the war, great efforts were taken to rebuild the city. Predictions that the city would be uninhabitable proved false. Destroyed monuments of Hiroshima’s historical heritage, like Hiroshima Castle and Shukkeien Garden, were reconstructed. In the center of the city a large park was built and given a name that would reflect the aspirations of the re-born city: Peace Memorial Park. 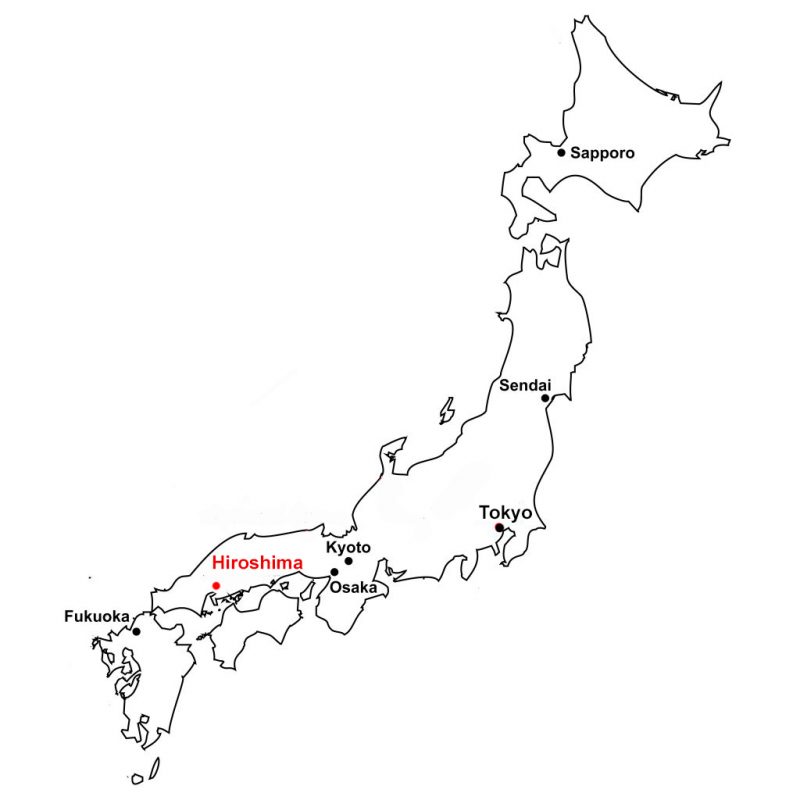 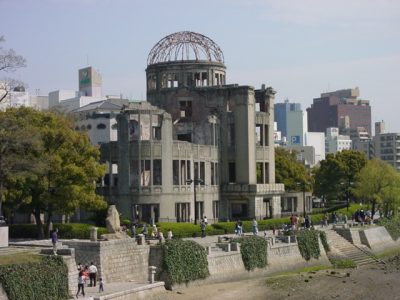 Hiroshima’s Peace Memorial Park (平和記念公園, Heiwa Kinen Kōen) is one of the most prominent features of the city. Even visitors not looking for it will likely stumble upon the large park of over 120,000 square meters. Its trees, lawns, and walking paths are in stark contrast to the surrounding downtown area.

The park’s main facility is the Peace Memorial Museum. Consisting of two buildings, the museum surveys the history of Hiroshima and the advent of the nuclear bomb. Its main focus though is on the events of August 6: the dropping of the bomb and its outcome in human suffering. The personal details displayed are quite upsetting and serve to remind that we should not take peace for granted.

The A-Bomb Dome, also known as the Hiroshima Peace Memorial, is what remains of the former Prefectural Industrial Promotion Hall. The building served as a location to promote Hiroshima’s industries. When the bomb exploded, it was one of the few buildings to remain standing and remains so today. A UNESCO World Heritage Site, the A-Bomb Dome is a tangible link to Hiroshima’s unique past. 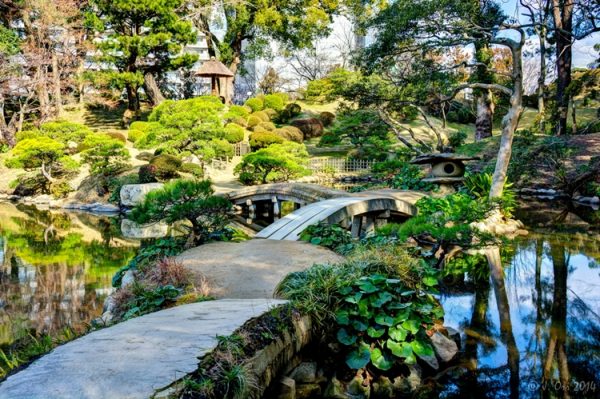 Shukkeien’s (縮景園) name can be translated into English as “shrunken-scenery garden”, which is also a good description of the garden itself. Valleys, mountains, and forests are represented in miniature in the garden’s landscapes. Through careful cultivation of the land and vegetation, the garden mimics a variety of natural formations and scenic views.

Shukkeien has a long history dating back to 1620, just after the completion of Hiroshima Castle. The garden displays many features of the traditional aesthetics of Japanese gardens. Around the garden’s main pond there are a number of tea houses which offer visitors ideal views of the surrounding scenery.

The entire garden is connected by a path which winds around the pond at the center of the garden. The path passes through all of Shukkeien’s various miniaturized sceneries. Following this path around the garden is the best way to enjoy Shukkeien. 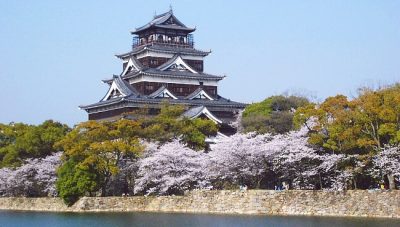 Hiroshima Castle (広島城, Hiroshimajō), also called the Carp Castle, is a good example of a castle built on a plain in the center of a city as opposed to hilltop and mountaintop castles. Its main keep is five stories tall, and its grounds are surrounded by a moat. Also within the castle’s precincts are a shrine, some ruins and a few reconstructed buildings of the Ninomaru (second circle of defense).

Miyajima (宮島) is a small island less than an hour outside the city of Hiroshima. It is most famous for its giant torii gate, which at high tide seems to float on the water. The sight is ranked as one of Japan’s three best views.

While officially named Itsukushima, the island is more commonly referred to as Miyajima, Japanese for “shrine island”. This is because the island is so closely related to its key shrine, Itsukushima Shrine, in the public’s mind. Like the torii gate, the shrine’s main buildings are built over water.

Miyajima is a romantic place, best enjoyed by staying overnight at one of the island’s ryokan. While there are usually many day tourists, in the evening the area becomes much quieter and more peaceful. There are also wild deer on the island that have become accustomed to people. In the day the deer wander around the same sites as the tourists, and in the evening they sleep along the walking paths. 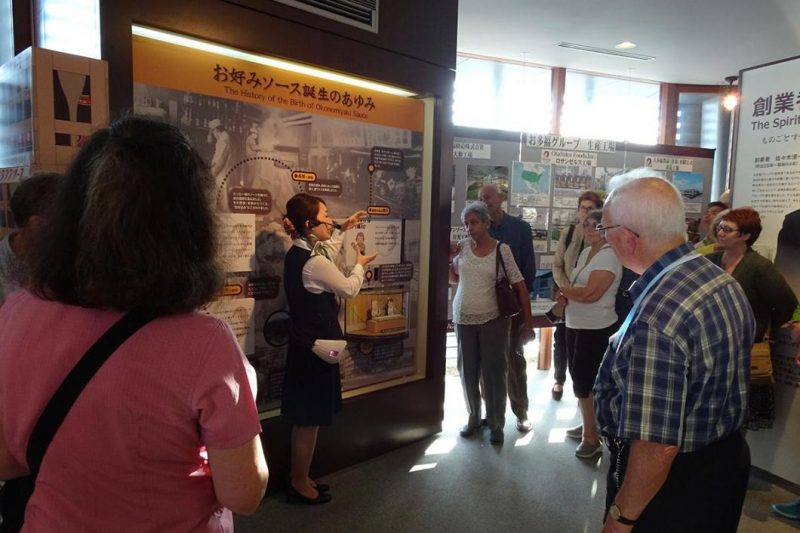 See what a day at the Otafuku factory looks like and what goes into creating a bottle of Japan’s favorite okonomi sauce. You will be able to take in the sights, sounds, smells and flavors of okonomiyaki culture as you learn about Japan’s favorite pancake. After the Otafuku factory tour, you will travel to the Wood Egg Okonomiyaki museum as well and learn about the history of okonomiyaki and the vital role it plays in Japanese culture. 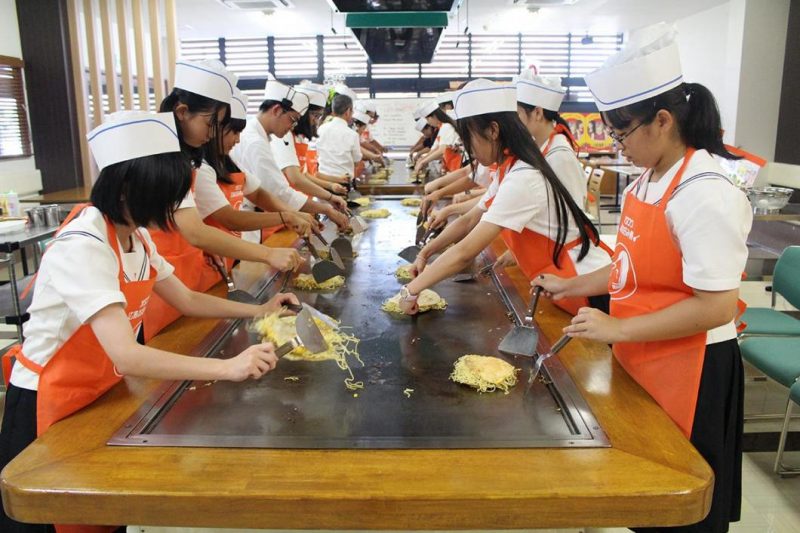 In an hour and a half you will learn all the tips and tricks on how to prepare okonomiyaki at home!