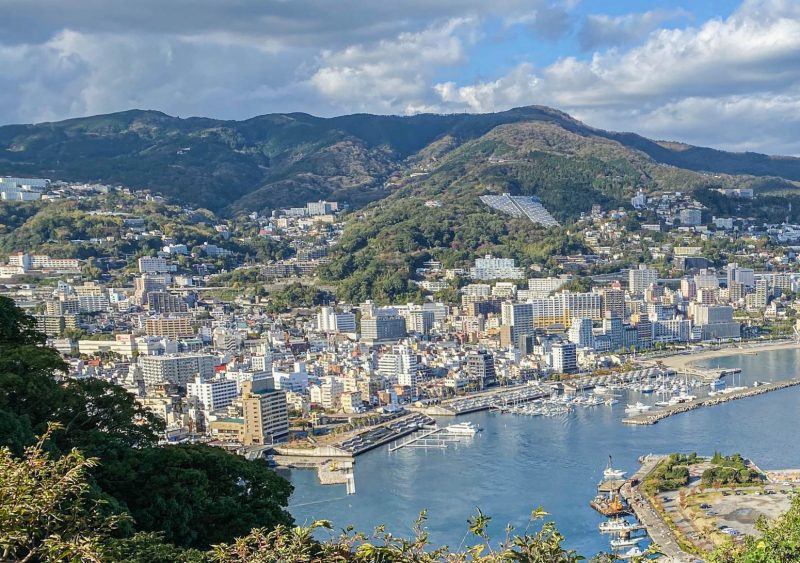 Atami Onsen (the literal translation of Atami is “warm ocean”) is located on the Pacific Ocean at the north-eastern edge of the Izu Peninsula about 100 km (70 miles) southwest of Tokyo. There is a Shinkansen station for the Tokaido Shinkansen that runs between Tokyo and western Japan in the middle of the town, making it extremely accessible from Tokyo as well as western Japan.

The bubbling waters of Atami have been luring bathers as far back as the Nara period (710-94). Shogun Tokugawa Ieyasu (1543-1616) was so enamored of their healing properties, he had the water delivered to him in Edo (present day Tokyo). The large footbath in front of Atami Station is named Ieyasu no Yu (hot water of Ieayasu). The water with its high salt content has excellent insulation properties, helping with neuralgia, and excessive sensitivity to cold. The water also tightens up the skin and tones the body. Today, Atami Onsen is a favorite destination for couples. It is also a favorite day trip for people from Tokyo, as well as overnight guests also.

The key word here is accessibility. It is one of the most accessible of the major onsens in Japan. At night the onsen takes a a special atmosphere.

Atami Onsen suffers from the same problem that many other onsen around Japan suffer from. During the bubble years (1980s), many onsen built many huge new hotels to accommodate the increased number of tourists visiti. But after the bubble burst (1990s), many of the onsen and onsen hotels had a difficult time because of the reduced number of tourists, and many hotels went out of business and are still unoccupied. Atami Onsen has done better than most adapting, but there are still some signs of the economic troubles.

While many of the hotels offer 日帰り (higaeri – day bath), there are no public bathhouses.

Built in 1959, Atami Castle is a touristy, concrete museum built in the shape of a castle. There are different exhibitions on each floor of the castle tower as well as an observatory with panoramic views of Atami city on the top floor. The exhibitions include samurai armor, Edo Period puzzles and a large display of Japanese castles. There is even a room with Shunga. Shunga are erotic Edo Period wood block prints. The Tokugawa Shogunate forbid them, but they were still made. Next door to the main building is a trick art museum. The best way to get to the castle is to use the ropeway.

Opened in 1982, the MOA Museum of Art has an impressive collection of Japanese and East Asian art. Also on the premises is a Japanese style garden with tea houses and a Noh theater.

Sun Beach is a 400 meter white sand beach, with a backdrop of resort hotels and palm trees. The beach is illuminated in the evenings, which is very popular among lovers. Many overnight guests can be seen in the mornings and evenings strolling along the beach in their yukata.

One of the leading rose gardens in the world, this garden boasts 4,000 rose bushes and 600 varieties. On top of the rose-covered hill is a cafe designed by world-famous architect Kengo Kuma, who also designed the New National Stadium in Japan. Located directly in front of the station, both provide convenient shopping at the beginning and end of your trip. These covered arcades have restaurants, cafes, sushi bars, dried seafood (dried fish and shellfish), and a multitude of Izu Peninsula specialty foods and souvenirs. Well-established shops with 60 and 70 years of history, as well as a growing number of trendy new shops provide visitors with local shopping experience that shopping malls can not offer.

Atami Onsen is one of the gateways to the Izu Peninsula. There are many things to see on the peninsula, but the easiest way to tour the peninsula is by rented car.

Maguroya is located in the basement of the Atami Daiichi Building directly in front of the Atami Station. It offers numerous shisendon (fresh seafood rice bowls), but the specialty of the restaurant is Magurodon (tuna rice bowl).

Onsen manju, a sweet steamed dumpling, is probably the signature sweet people think about when they look for a gift to take back from Atami. The core ingredient is sweet bean paste. There are plenty of variations to choose from, including ones that incorporate bitter orange peel, barley flour, Japanese yams, brown sugar, tea, and even perilla leaves. There are numerous shops located in the Atami Ekimae Nakamisedori Shotengai.

When I stay at Atami Onsen, I prefer to stay at the Korakuen Hotel. It is located on the western end of Atami, directly on the ocean and next to the ropeway station. It is a large hotel with a old and new section. The rooms in the old section are primarily Japanese-style tatami rooms. And the rooms in the new section are primarily western-style. The original bath is in the old section. It is a nice bath, but nothing special. The bath in the new section has an outdoor “infinity” bath with a view of the ocean. There are also other indoor and outdoor baths, all with an ocean view. And the sauna has an ocean view as well. In addition, there is a huge “Relaxation Room” with many different kinds of chairs, sofas and beds where you can even take a nap. There is an extra charge for the new bath, but it is certainly worth it. There is even an entrance from the bath directly to the restaurant. You can take a bath, go directly to dinner and then return directly to the bath. What more can you want? Another good thing about the hotel, at least for me, is they accept single travelers without gouging you on the price. There are a lot of Japanese families and young couples from Tokyo that stay at the hotel.

To get from Tokyo to Atami, you can take the Kodama Tokaido Shinkansen, the limited express Odoriko, regular Tokaido trains, or the bus. The shinkansen is the fastest at 50 minutes. The highway bus is much cheaper but takes two and a half to three hours depending on traffic.

The best options for day-trippers

Several hotels near Atami Station that have open air and indoor baths, and private baths available to rent. There is even a footbath called Ieyasu no Yu in front of Atami Station named for the famous shogun.